All that was needed to add a touch of Ionian style to this elopement shoot were some unique details. Inspired by a tablecloth embroidered with the Lefkada stitch called Karsaniko, loaned to me by Christina at Gourioti Flowers, I sourced some hand-made jewellery created from peices of the same style and set to work!

The floral arch for this beach elopement inspiration was created by my florist partners, Tasos and his mother, Christina. The base was long, feather like leaves of Greek eucalyptus studded with white hydrangeas, roses and chrysanthemums. We opted for a half moon style of wedding arch, to allow the brilliant, blue Ionian sea to be our backdrop to the initmate ceremony setting.

A tiny pop of yellow was added to the bouquet and table centrepeice with delicate marguerite daisies.

In the bouquet, I wanted to incorporate the silvery, green leaves of Dusty Miller. If you take a walk along the coast near Agios Nikitas, you can often find this growing wild, as it likes the west coast climate.

The tablewear had a touch of gold to bring out the colour of the Lefkada embroidery on the tablecloth. Paired with crystal flutes and candlesticks and a display of crisp, sweet merringues from the patisserie.

Whilst you do not need all the elements of a standard stationery set for a destination elopement, you can still have pretty details, such as an announcement note and vow cards for your ceremony.

To illustrate our stationery, the geometric design of this famous stitch was copied on to pale lemon card and paired with a grey envelope.

The west coast of Lefkada is perfect for a destination beach elopement. I chose Agios Nikitas, a traditional village which has a smooth, paved pedestrian street winding down to the white, stone beach. You wind your way past white-washed houses with wooden shutters and gardens bursting with flowers: all adding to the romance of the setting.

Do you love this shoot’s unique take on a beach elopement? Then keep an eye on my blog for more inspiration soon!

Thank you to everyone who helped with this beach elopement inspiration at Agios Nikitas:

Kalo Mina! Welcome to February and what a great to start to the month at Lefkas Weddings with an award winning elopement in Greece! I was ecstatic to get Ellie’s message this morning that their romantic day is the finalist in the DUO Magazine Australia, Wedding of the Year!

Eschewing a traditional wedding they decided on a six week trip of lifetime island hopping around the Greek islands with a relaxing stop in Lefkada for a few days to tie the knot with an intimate elopement.

The private, waterside location was sourced especially for this adventurous couple to create Bride Ellie’s, dream of a fairy light garden by the sea.

Their elopement was shot by one of my favourite photograpers, Lefteris Kalampokas. He told me ‘I love to shoot both film and digital and love natural light and beautiful surroundings. My approach is to tell the story of my clients, documenting intimate emotions, joyful smiles and elegant details of their wedding day. I love the tiny details, meaningless to some people but which make the day truly unique. Those same details we will enjoy looking at years later, teary-eyed and overwhelmed with emotion’

Ellie and Jesse travelled across the world for their wonderfully romantic elopement in the Ionian island of Lefkada, Greece.

The private, waterside location was sourced especially for this adventurous couple to create the Bride’s dream of a fairy light garden by the sea.

The only sound was the water gently lapping at the side of the deck as Ellie made her way down the steps to meet Jesse under a gazebo of flowers. It was intimate and romantic.

Lefkada was a relaxing break after the bustle of sight seeing in Athens and before they jetted off again for the next part of their extended holiday around the Greek islands and Europe together. The spectacular view of the ceremony and its setting fulfilled their shared love of the ocean.

” I chose the restaurant wharf from the options Claire selected for us because I knew we both needed to be able to see the water. We both grew up on the Great Barrier Reef. My husband spent months at a time as a child on the ocean and I on an island so the water makes us feel at home.” ~Bride, Ellie.

Ellie’s dress incorporated a few different styles. She wanted something sexy yet simple. Finding it hard to find a white dress without added detail and embellishments, she commissioned a handcrafted gown from Peta C with a slight flair and short train. It was simple, timeless and understated.

Her hair was worn in loose waves and fastened with a comb of blush pink peonies and roses that also surrounded the Protea flowers in her bouquet. These are very similar to the Warratah, the Australian national flower and was included as a touching tribute to her sisters. Though they wanted an intimate elopement, Ellie and Jesse are also big family people and her sisters are her best friends, so eloping was a huge decision as it meant she was without them.

In the décor we used a lot of florals and fairy lights to create a feeling of intimacy and enchantment. Using an image of an enchanted garden that Ellie sent to me, the team created hanging gardens overflowing with flowers, structured around a gazebo. It was a designed in two parts, so the couple saw one floral display during the ceremony and the final look was a surprise. Waving them off on a luxury speedboat cruise around the islands, my team quickly go into action, hanging lanterns, opening fairy lights and filling the deck with lanterns. When they returned it was a candlelit paradise!

” I couldn’t have achieved our dream day without Lefkas Weddings. You need a planner/helper/elf! If you are thinking about it, don’t think, just do it! Claire is so amazing and always cool, calm and collected. Our day was completely stress free and magical. “ ~Ellie & Jesse

If you have your heart set on an elopement in Greece and need some help making it happen, send me an email here. I would love to discuss how we can make your very own elegant and romantic Lefkada elopement a reality. 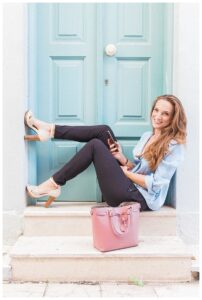 As well as elegant and fashion-forward brides ever